On behalf of the education organizations listed at the end of this letter, we want to first thank you and your staff for your tireless work supporting public education in Texas during this unprecedented time of crisis. We are all in this together.

This is an extraordinary time with many challenges at both the state and local level. We wish to provide you with thoughtful comments that may inform your decision-making process about new charter expansion amendments.

In this extremely difficult time for both school districts and charter schools, we are especially concerned about sustaining state funding for House Bill 3 given the dire state budget projections provided by the Texas Comptroller. We are also concerned about the unpredictable and unbudgeted costs that school districts and charter schools will likely incur in their efforts to combat the COVID-19 crisis.

Due to the gravity of the situation, we urge that any available state funding for public education be used to sustain the improvements from HB3 and to help existing school districts and charter schools meet the daunting new challenges presented by COVID-19. Educators and administrators are focusing their efforts and resources on creating entirely new systems to educate children virtually while providing critical support to students, especially those who are most vulnerable. We ask that, likewise, TEA also prioritize state funds to sustain the promises made in HB 3 to students, teachers, and taxpayers and to help schools meet the demands of this crisis in the coming months.

Charter schools receive an average of almost $1,200 more per student from the Foundation School Program (FSP) than what the same student would have cost in the student’s home school district. This is because all charters, regardless of size, receive an average of the small-to-mid-size allotment even though this allotment is actually intended to help small districts with 5,000 and fewer students address costs related to economies of scale. This increase in state cost from new charter school enrollment would make fewer state dollars available to honor the promises of HB 3 and to support the critical mission of school districts and charter schools that are struggling to serve students in an unparalleled crisis.

Note that 27 expansion amendments submitted by only one charter holder (IDEA Public Schools) account for 45 percent of the total charter requests to increase maximum student enrollment and would add 34,785 new students at an additional cost of approximately $40 million annually to the state at full enrollment. If these amendments are approved, IDEA would have a maximum enrollment approval for 97,985 students, almost double its current enrollment of around 50,000 students. It also would double IDEA’s current FSP funding ($498 million) to almost $1 billion per year in general state revenue. That level of funding is roughly half the local tax dollars recaptured and appropriated by the state.

In addition, the current TEA-approved charter school maximum enrollment capacity statewide is an estimated 558,728, even before this 2020 round of amendments. That’s more than two hundred thousand above current charter enrollment of 336,900. If charters statewide enrolled at their current maximum enrollment capacity, for example, they would raise their current FSP entitlement of $3.29 billion to an estimated $5.7 billion per year, which is 26 percent of the $22 billion in state general revenue appropriated for FY 2021 for all public education. At this level, the overall additional cost to the state rises dramatically (due to the average of almost $1,200 per student charter funding advantage over school districts) and would cost the overall system roughly more than $250 million in additional state revenue per year.

This potential negative fiscal impact speaks to the need for caution not just on the maximum enrollment expansion amendments, but also on other expansion amendments – such as adding new campuses and sites, geographic boundaries, and grade levels – that would accelerate an increase in enrollment and result in increased cost to the state.

As the state considers reductions in agency budgets and programs, granting the requested amendments could with one act increase the overall cost to the FSP by more than TEA’s total administrative budget. At this critical time, we ask that you take to heart TEA rules which allow for approval of a charter amendment only if the amendment is “in the best interests of the students of Texas” [TAC 100.1033(b)(9)(A)(viii)]. We believe that your decision to deny or limit charter expansion is one financially prudent way to reduce additional new obligations on the state budget and ensure that limited state resources go where they are most needed. We contend that this decision would be in the best interest of all Texas students.

As you review charter expansion amendments, we ask for consideration of the following criteria when awarding or denying an expansion amendment to ensure that state funds are used efficiently, charters serve all children equally, and the fiscal impact on school districts is considered:

Charter schools should provide compelling justification that a new campus is actually needed in the proposed geographic area and that there is strong parent and community support for the new campus. Example: Although the charter expansion amendment request form requires charter schools to provide a justification for their expansion amendment, the response from charters schools often lacks any data or other information that provides evidence of need. In each of its 20 expansion amendments filed in 2019, IDEA provides the same generalized statement for each request to justify the expansion, simply plugging in the name of the appropriate school and region: “The requested amendment would allow IDEA to provide a college preparatory education to additional students in the Rio Grande Valley community.” IDEA provides no data or information that supports the need for a new campus, such as the need for additional seat capacity in the geographic area; the lack of saturation of charter schools in the geographic area; and concerns about the current education opportunities that warrant a new charter campus.

The response from IDEA also does not provide any evidence of local support for IDEA from parents or community members. In 2020, parents and community members in Del Valle ISD have written to you expressing their concerns about IDEA’s proposal to locate two schools within one mile of two existing Del Valle ISD schools without any community input, public notice, or evidence of need. One of the district schools was part of a bond package approved by 70 percent of voters, and it opened in 2018.

The saturation of existing charter schools in a district and all new charter campuses proposed this year through either the amendment or new application process should be considered to determine the overall fiscal impact on the district if all of these expansions were approved. Example: Multiple charter expansion amendment requests and new charter applications may target enrollment in the same school district. The aggregate impact on the district could result in an overwhelming loss of revenue, especially for a small-to-mid-size district. Leadership at a small school district in North Texas with enrollment of under 3,500 students is seriously concerned because multiple new charter expansion amendments and a new charter application include the district in their primary geographic boundaries. If all of these expansion requests were approved, it would result in a loss of students and revenue that could have a devastating negative fiscal impact on the district.

The track record of an existing charter holder should provide evidence that the charter has the experience and internal capacity to successfully execute its requested charter expansion and that it has fulfilled its requirements in the charter contract. Example: Compass Rose Academy has submitted expansion amendments to open four new campuses, two in San Antonio and two in the Austin area. Compass Rose requests a start date of 2020 for two campuses which would allow only four months of advance planning if the amendment is approved in April. Compass Rose was approved to open three campuses when it received its charter in 2016 but currently operates only one campus in San Antonio.

Charter holders should keep Texas taxpayer dollars in Texas and should not send a significant percentage of state funds to an out-of-state charter management organization (CMO). Example: Basis Texas has submitted expansion amendments to open six new campuses that would almost double its enrollment. Basis contracts with a for-profit affiliated charter management organization called Basis Educational Group, Inc. (BEG) that is located in Tucson, Arizona. Under the terms of the contract, BEG receives 20 percent of total revenue received by Basis Texas to pay for “general” management, operational, and accounts payable services. Based on annual FSP payments to Basis (from TEA Summary of Finance), Basis has potentially paid BEG over $17.5 million in state funds over the last seven years.

Given the unprecedented demands on both school districts and charter schools, charter expansion amendments that request a start date in 2020 should be denied unless there is a clear rationale and urgent need for this expedited timeline. Example: Twelve charter schools have submitted expansion requests to open 20 new campuses or sites for the 2020-2021 school year (almost one-third of all new campus requests), giving both existing charter schools and school districts only 2-4 months advance notice and planning time after the charter amendment has been approved and before the new campus opens.

Thank you for the opportunity to comment on the new charter expansion amendments. Please contact representatives of any of the organizations that signed on to this letter should you have questions. 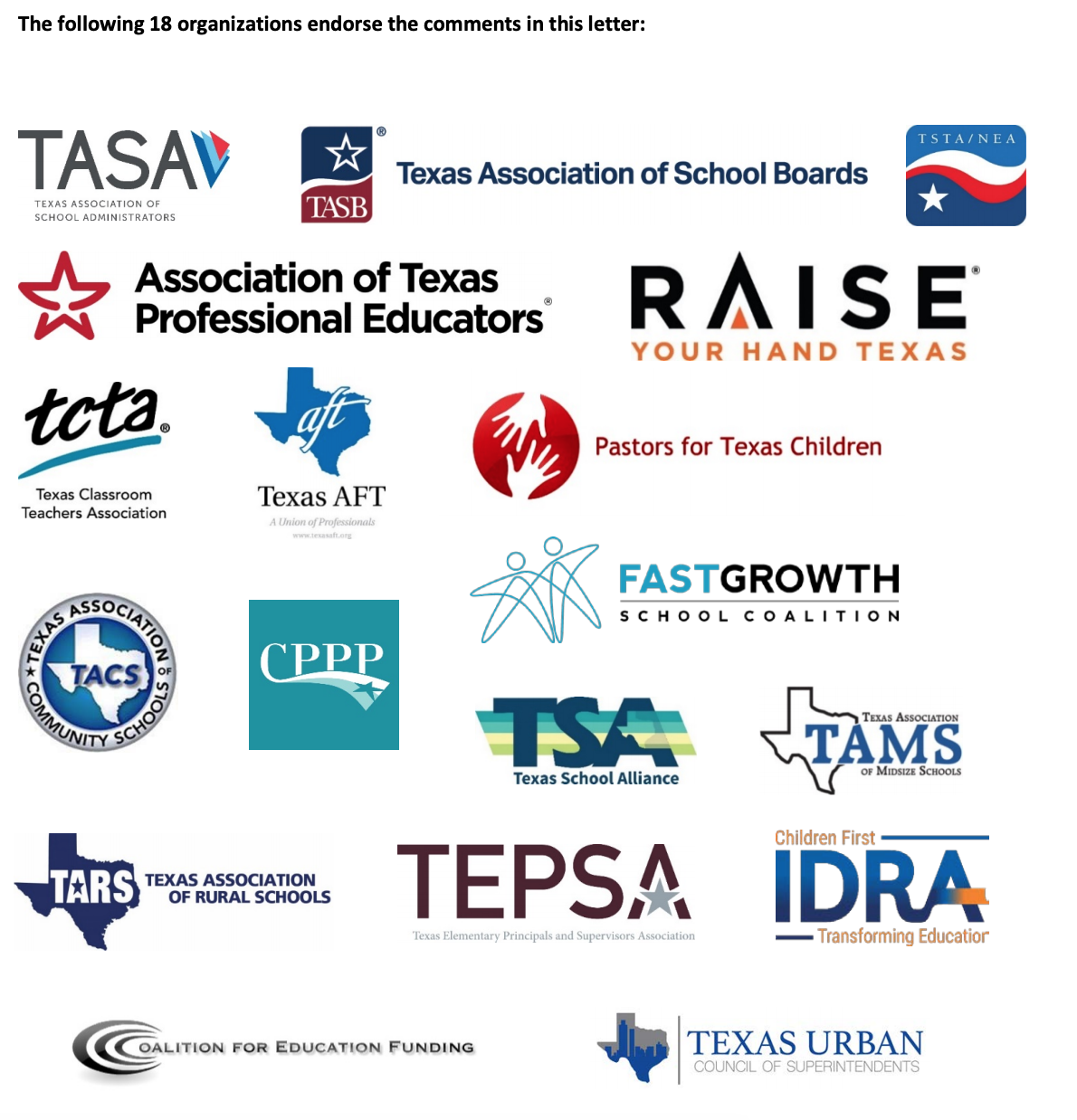